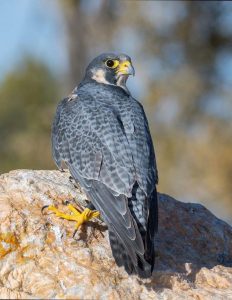 Background: This male peregrine was captive-bred and hunted as a falconry bird for approximately ten years. When he began to slow down due to age, he was placed with another organization in Colorado where he was trained for educational programs. Due to changes in their operations, he was transferred to our facility in July 2019.  Because he was initially trained as a falconry bird, he is kept tethered as is often the case with hunting raptors.

He will be 19 years old in 2021, making him a very senior member of our education team. As is typical of many of our elderly raptors who are well beyond the normal lifespans of their wild counterparts, he has a few medical issues which we manage on a daily basis. You may notice near the end of the video when he steps out of the bath tub up to the rim, that the medial toe on his right foot is short. Approximately four years ago he developed an infection in that toe after sustaining a minor laceration. The infection spread and the vet treating him was concerned about sepsis, so the decision was made to amputate the affected distal joint. Since that time he’s had no foot problems, though his balance on the glove is slightly compromised. The video was filmed on February 2, 2021, during one of Colorado’s not uncommon 70 degree winter days.

During the summer of 2020, he also lost the distal third of his left wing in a rather unusual case of a cryptic injury which manifested only as slightly-drooping feathers for over a month. The circulation became compromised in his outer metacarpal joint which resulted in the auto-amputation of the joint. We suspect that he may have bruised the joint on the underside of the wing, possibly on his shelf perch when jumping to it from his block. Fortunately, there was no infection, no swelling, and apparently no pain nor discomfort. We were already in the process of moving his area in the enclosure to the northeast side, where he would have good southern sun exposure during the winter to keep warm. When the wingtip loss occurred, we lowered his shelf and modified the block so that he would be able to more easily jump from the ground to the block, and then up to the shelf. Although he is still periodically pinching off feathers on this wing, he has adjusted to the new arrangement and has grown in two of his innermost primary feathers.

You may also notice a rather large, bulging crop on him as he bathes. The crop is the pouch above the wishbone for the temporary storage of food in diurnal raptors and some other bird species. We feed him between 2.5 and 3.0 ounces of food each day in the winter, a very large amount for a fairly inactive bird that weighs only 16.5 to 17.0 ounces. He has a huge appetite, but is very picky: he won’t eat any bones, except for the wing bones of a quail, and the neck. The rest of his food is pure quail meat, with vitamins three days per week. Remarkably, his metabolism is still that of younger bird, as he does not gain much weight despite the amount of food he eats each day. When the weather is warm (meaning over 55F) his typical routine is to eat around 1-2pm, and then take a big bath, and “digest”, sometimes sitting on his heel joints on the shelf. He and our elderly male kestrel have a similar behaviors; the kestrel will often tuck his head under his wing after eating and actually nap in the middle of the afternoon, and we occasionally see our peregrine closing his eyes for brief periods as well.