Our educational programs are dependent on the research and discoveries which allow the knowledge base about birds and their ecosystems to expand and grow.  We know these discoveries  will improve conservation sciences in general and raptor conservation in particular.  The ICARUS  project has the promise to  rapidly expand and grow the knowledge base for many wildlife species, which is why we are seeking your support to allow REF to become a key player in getting as many at risk raptors equipped with these marvelous transmitters. The units weigh 5 grams, and the image below is a true model of the transmitter. 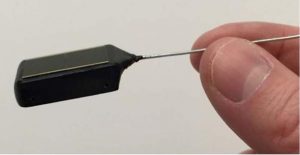 This October (delayed from June), a Russian rocket will lift an array of sensitive dish antennae up to the International Space Station. With a low Earth orbit, the antennae will be able to decode faint radio signals from tiny solar-powered tracking tags, light enough for migrating songbirds to carry safely. If things go as planned, within two years as many as 20,000 animals may be tagged.  Thousands more will be added in the coming years. The ICARUS (International Cooperation for Animal Research Using Space) Project, created by the Max Planck Institute for Ornithology in Germany, is hoping this remarkable endeavor will begin a new and intimate look at wild animals by tracking their wanderings like never before.

With backing from German and Russian space agencies, ICARUS will permit field researchers to open up the mysterious world of animal migrations and routes, which will help the conservation of numerous species and keep governments informed about possible threats from diseases like avian influenza.

We are hoping to influence wildlife agencies (both state and federal) to mandate that raptor rehabilitators place these new high tech tags on certain raptor species. Initial cost factors will limit the available tags, but golden and bald eagles would be perfect candidates because of the challenges created by industrial wind farms. The data gathered by the new technology will be invaluable to furthering the science of rehab and raptor conservation.

We have launched our REF Friends of ICARUS Fund to help educate agencies and rehabilitators about the significant value of using the ICARUS  tags and tracking system. Of course, we will be furthering our interest and focusing on tagging raptors and funding the acquisition and distribution of these tags. Dollars raised will be spent on staff time and expenses related to advancing the participation with ICARUS to all relevant agencies and rehabilitation organizations. Become a friend of ICARUS REF and support this very important and valuable tool for wildlife conservation and research.

Thanks to Kimi Kondo, Susan Anstine, and 2 anonymous donors for getting our fund started! Get your name listed here with a minimum contribution of $20.