Review what people say about our programs, our consulting services, and see some of our milestones. Click on images to enlarge. 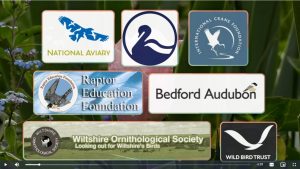 Many of our millions of monthly visitors will now be exposed to your work. Some background: Founded in 2011, Ezvid Wiki was the world’s first video wiki, and is now among the top 3,000 websites in the United States. Our YouTube channel has over 600,000 subscribers, with over 350 million views since founding.

The Wiki never accepts payment for inclusion in any wiki, however, we do ask that, as a favor, you do link to this published wiki page from your official website.

We know the digital universe reaches far beyond our small feathered world, and when this notice arrived, I can’t say I wasn’t completely surprised.  Thanks to the folks at Video Wiki for this recognition. To be included with The International Crane Foundation is truly an honor. ICF’s Co-Founder, Dr. George W. Archibald provided important back ground information for our first project in the then Soviet Union. After 41  years and in the midst of a pandemic world we will take any good news! 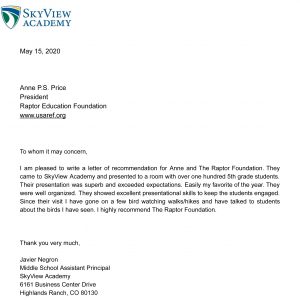 Since the opening of the Birds of Prey ski course in 1997, our female golden eagle has been on the podium with dozens of winning champion international skiers. 2019 was a very special year as this video reveals. The weather really didn’t keep anyone indoors (at least not for long) and it was absolutely thrilling to be on the sidelines and watch Tommy Ford come down the hill, fast as a peregrine. It’s been a few years since our golden’s been next to an American on the podium, and all of us, from spectators to volunteers, media and Tommy’s teammates on the US Ski Team were just giddy with excitement! Just to be clear, you don’t “lose” a place on the podium by much: Tommy was just 0.80 seconds ahead of Henrik Kristoffersen and 1.23 seconds ahead of Leif Kristian Nestvold-Haugen, both of Norway, who placed second and third, respectively. Shouldn’t we be part of your winning team? Call us at 303-680-8500 or send an e-mail to PR@usaref.org.

Their Faces Tell Our Story

Since 1980 the best advocates for our programs are the children who experience raptor magic early in their lives. Their faces are our testimonials!

I have attended numerous presentations and photo-shoots with REF for the past 4 yrs. I couldn’t recommend any organization more strongly. Peter and his crew are experts in the raptor world and impeccably organized through all types of pubic interactions. Raptor Education Foundation’s deep 24/7 commitment to the raptors  is obvious and always  their motivating factor. Although I am a doctor of humans, it seems they provide world-class care for their 30 eagles, owls, hawks and falcons. They offer incredible quality in their work, and it always feels to me I am getting a lot more from them than the  cost of the activity!  I give them the strongest recommendation!

Your team was absolutely delightful.  Our guests and members really enjoyed the program and overall, I’d say it was a great success.Thank you for your support and for protecting and educating people about raptors!

Thank you so much for the amazing Raptor Rendezvous presentation. It truly was a fantastic experience and I was completely in awe of your program. I have heard so much positive feedback from our guests, members and staff! It was a very special addition to our program and I look forward to working with you all more in the future. It was an absolute pleasure working with you and the REF team from start to finish, I can’t tell you enough how much I appreciate it all.

In 2013, 2015, 2016, 2017, 2018, 2019 Colorado Parks & Wildlife contracted REF’s Raptor ID Course for all of their state park raptor monitors. This extensive course benefits from REF’s live raptor collection coupled with the 3 decades plus experience and compilation of exceptional photographs by Karen Metz, raptor monitor extraordinaire!

“As a coordinator of a volunteer raptor monitoring program, I am always looking for ways to educate and inspire our citizen science project participants.  I have been working with REF for many years and they continue to provide an amazing experience for our group.  The opportunity to see raptor species up close is inspirational and Anne does a fantastic job of describing the field marks and behavioral characteristics of the species she presents.  It is also very educational to hear the story of each bird and how they came to be ambassadors for wild birds of prey.  I look forward to continued work with REF so that we can continue to motivate folks to be active participants in raptor conservation.”

Inspire your team with our corporate programs! 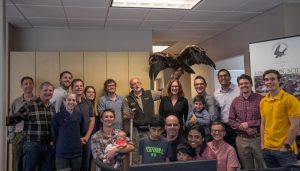 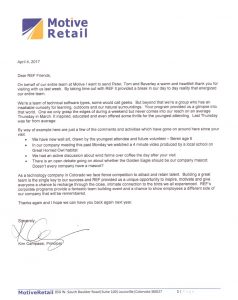 Seeking the best in natural history programming, the 36th FIPS Mouche World Fly Fishing Championships contracted REF to educate the competitive teams from 27 different countries gathered in Vail, Colorado, September 11, 2016 about some of the raptors native to the area.  REF’s program was presented during the opening ceremonies and banquet at the Vail Marriot Hotel & Spa.

“Thank you for providing the cultural component for our opening ceremony and dinner.  The raptor presentation was outstanding and shared a piece of the American West to our guests. The informative talks on each bird were educational and enlightening.  To have the one raptor utilized for our team pictures was a highlight for all.  The hard work of the Raptor Education Foundation staff’s preparations paid off with satisfied attendees and smiles everywhere.
I would recommend the Raptor Education Foundation for any group or event that wants to feel the majesty of these iconic birds in their presence while also learning about their care and how they interact with nature.”

We generally offer 2-4 identification courses each year.  One in the spring and 2-3 more into the fall.

“Just a quick note to tell you how much I enjoyed the class over the weekend! It was my first time out and was so impressed by the facility and the raptors. Your knowledge is mind boggling and the education I received was amazing!!! My new ability to make an educated guess is already driving my family crazy. I look forward to attending more events and spending more time learning about the raptors and all that your organization does.”

Kirsten Medeiros for Signs of Spring, 2017

“I had a great time at the class and, as usual, learned so many things and had such an enriching experience. The teachers are great and the birds are great, what more could I want?”

“I attended the raptor identification class yesterday, September 25, 2016. I want to let you know that I thoroughly enjoyed what was for me a beginning lesson in identification of raptors. I am far from expert with songbirds but I feel comfortable with my ability to identify them. Raptors have been difficult and now I know why. The combination of the excellent slides and the live birds gave me a feel for how to go about identification. I know it will take a lot of practice and I will avail myself of future opportunities to attend classes.Thank you for a very special day.”

“I came to the Raptor ID course yesterday (9/25/16) It was very enjoyable and informative, I will be back.  All the employees were very knowledgeable and willing to answer any questions…  Thanks for a great day,” 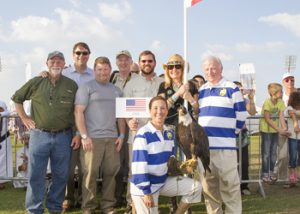 In December, 2014, the 3rd International Falconry Festival, held in Abu Dahbi, recognized REF by sponsoring REF’s Curator, Anne Price, to attend this international gathering representing  almost 80 different countries.  REF was the only raptor education organization in the United States to be sponsored, and Anne presented REF’s work in the education pavilion.

Anne is pictured holding an American bald eagle during the parade of nations. 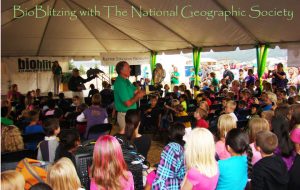 Natural solutions for rabbit, pigeon, and other pest problems 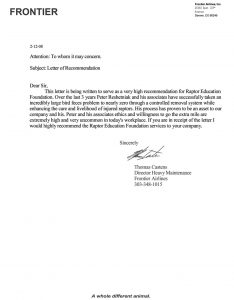 Click on the letter of recommendation to see full text.

During 2006-2010 at Denver International Airport, REF developed and implemented a pigeon control program at one of the airport’s hangars for Frontier Airlines. Using its exclusive Large Area Integrated Prey Management System REF eliminated 95% of the pests within 6 months along with the collateral risk of zoonotic diseases spread by  thousands of pounds of pigeon fecal matter deposited within the hangar facility. By March, 2009, REF was maintaining a 99.9% success rate at the Frontier facility, however, this project closed when Frontier Airlines was purchased and their heavy maintenance operations were moved at the behest of Republic Airlines, their new owners. REF used the pigeon’s normal behaviors against them. The same methodology works with cottontail rabbits, thereby eliminating the need for using any toxic substances, which includes anti-coagulants.

The Raptors of North America 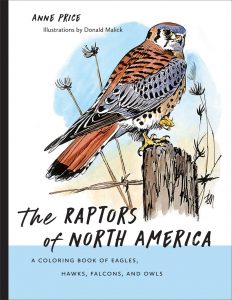 The best introduction to raptors is back!

In 1984, REF published the first professionally produced coloring book for all ages.  Illustrated by one of the world’s best wildlife artists, Donald Malick, with a foreword by the peerless, Roger Tory Peterson, this classic was in print for 32 years. The original book’s text was written by Dr. Frances Hammerstrom, renown raptor researcher and writer, while subsequent revised and expanded editions were written by REF’s Curator, Anne Price. Read a review.

The completely revised edition is now available from the University of New Mexico Press,  Amazon, and Barnes & Noble. This new edition features color throughout with added features guaranteed to help everyone enhance their raptor experience! 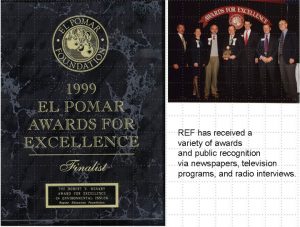 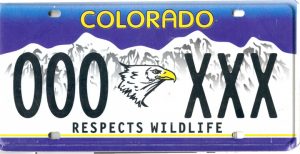 “I wish to highly commend… the Raptor Education Foundation for their sterling performances held here at the California Academy of Sciences, April 10 -19, 1998.  …The participation of REF was instrumental in contributing to the success of our raptor exhibit, Hunters of the Sky. The program that REF offers is unique in that it provides an opportunity for the public to see and watch raptors fly ‘up close and personal’, yet it also imparts to the audience an appreciation for the global ecology of raptors.”

Read what teachers and children say about our programs. 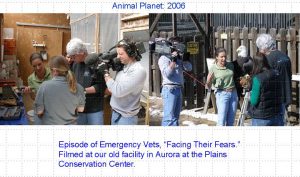 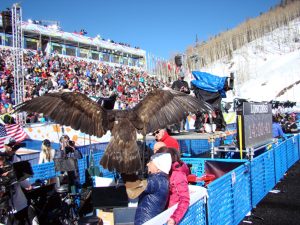 Our 37 year old female golden eagle is viewed by tens of millions of people world-wide during ESPN’s global broadcasts from the races each year. In the top image, Anne Price, REF’s Curator is being interviewed with our female golden for French television audiences (live) during the races. In the bottom image, our eagle is part of the awards presentations for both the women and men championship winners. 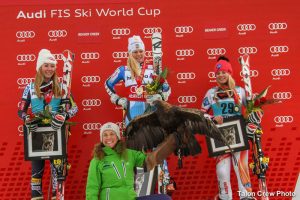 “What separates this organization from others dedicated to preserving wildlife is its focus on bringing information to school children. Since 1980, when the foundation got its start, REF representatives have presented a one-hour program about eagles, hawks, falcons, owls and other birds of prey to well over half a million students both here in Colorado and in in states such as Ohio, New Mexico, and Nevada. And these displays aren’t boring affairs filled with faded slides. Instead, falcons and the like are the stars of a show that teaches kids about ecological diversity without the kids realizing how much they’re learning.”

RAPTORS, The Birds of Prey, An Almanac of Hawks, Eagles, and Falcons of the World

Published in 1996 by Lyons & Burford listed only 29 raptor organizations in its chapter, “Helping Raptors.” The Raptor Education Foundation was the only Colorado organization included. 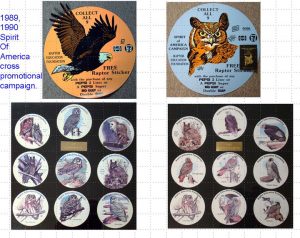 1989-1990-REF’s statewide cross promotional campaign reached tens of thousands of people with special educational raptor stickers and a state-wide tour of schools. Partners included 7-11 stores, Pepsi, Oscar Meyer, and numerous media companies. This is still the largest raptor promotion in Colorado ever done by anyone. 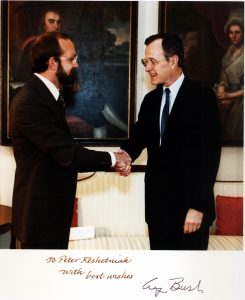 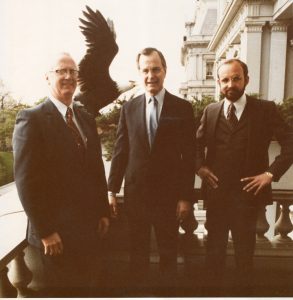