Louis Agassiz Fuertes (1874-1927) was arguably one of the most reknown and influential bird artists of the 20th Century. Roger Tory Peterson proclaimed in the introduction to the 1971 book, Louis Agassiz Fuertes and the Singular Beauty of Birds, by Frederick George Marcham, that “nearly all American bird artists, directly or indirectly, have been influenced to some extent by the bird portraiture of Fuertes.”

One of Fuertes’ favored students, George Miksch Sutton, was later regarded as one of America’s best bird painters. Sutton, in turn, passed the Fuertes painting inflluence to Donald Leo Malick, whose work is shown here in our online sales gallery.

The images exhibited here are from the 1910 (Vol. I) and 1914 (Vol. II) classic text Birds of New York State by Elon Howard Eaton. Originally commissioned by the state of New York for this publication, many of these plates also appeared in Birds of America, (The University Society, 1917; New York: Doubleday, 1936). The originals are now housed in the collections of the New York State Museum in Albany.

Click on any image to see a larger version. 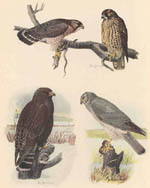 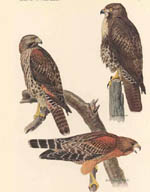