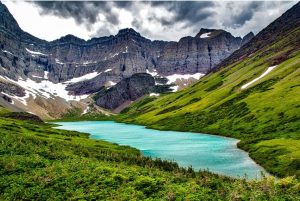 I’ve been re-reading what American literary critic, Edmund Wilson, called “The best book in its field in any language, ” Three Who Made A Revolution by Bertram D. Wolfe, where Wolfe describes Lenin, Stalin, and Trotsky and the bloody history in words and deeds of the troika that gave birth to a 75 year experiment which ultimately aborted itself. The historical revisionism of comrade Stalin as he rose to the pinnacle of Soviet power was enabled by a cadre of those who feared the Georgian monster rising silently in their midst.  It appears that the National Park Service has copied Stalin’s style as they have been caught rewriting history about Montana’s Glacier National Park. “May 30, 2019. St. Mary, Montana. Officials at Glacier National Park (GNP) have begun quietly removing and altering signs and government literature which told visitors that the Park’s glaciers were all expected to disappear by either 2020 or 2030.”

It appears that the glaciers in the park are actually growing.  Some of them by as much as 25%!  Remembering that this is 2019, and the date is fast approaching when visitors to the park will certainly notice the glaciers are, in fact, more prominent that climate change, global warming ideologues would want you to notice.   Even the Wall Street Journal is beginning to hint that maybe the final solution of powering the world via sunshine and breezes maybe an idea that needs to be aborted.  What is the world coming to?  How about Warren Buffet betting billions on the future of coal as he harvests millions in federal tax credits by investing in bird killing wind farms!  Peter Reshetniak: President